The Return of Elite Eleven

After a long year out, yesterday saw the return of Boston College’s annual sporting event, Elite Eleven, with this year’s title going to Bourne Grammar School. 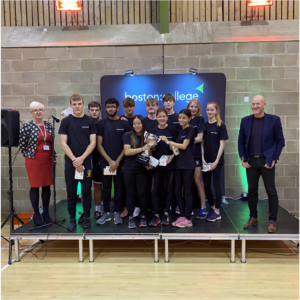 Elite Eleven is an inter-school sporting competition involving secondary schools from around the county, competing against each other in a variety of indoor sporting challenges. The event highlights the incredible commitment, teamwork and motivation of many young learners and raises aspirations for all those involved.

Each team was made up of 11 boys and girls from years 10 and 11, all competing for the coveted ‘Target Team Award’ trophy. Each member of the third, second and first place teams also received an individual prize, ranging from fitness trackers and portable speakers to vouchers from the event sponsors, Reach PLC, Geoff Moulder Leisure Complex, Mayhem Gym and Ninja Mitton Gaming Cafe.

The event also saw a special guest appearance from well-recognised local sporting star, Paul Bastock. Paul made his footballing debut back in 1988, and after spending 13 years with Boston United making a record breaking 678 appearances, he has since gone onto break the world record for the most competitive appearances in world football with a total of 1282. Paul is currently the Assistant Manager of Kings Lynn Town FC, and was named as a substitute in May 2021, meaning at the age of 50 his career is still going strong with 33 years as an active player. This highlights the importance of never giving up and continuing to do what you enjoy the most.

Mark Bridges, Sports Lecturer said, “It has been great to see so many schools competing at this year’s Elite Eleven. I would like to congratulate all of the competitors who have displayed their sporting excellence as they tackled a number of physical and skill related activities. Elite Eleven provides a great opportunity for learners to step outside of their comfort zone and work together to achieve the same goal. I would like to congratulate all competitors and highlight the support of our sponsors.”